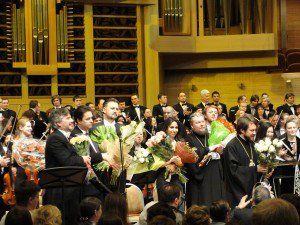 On 9 January 2013, the Third Christmas Festival of Religious Music opened at the Moscow International House of Music with the blessing of His Holiness Patriarch Kirill of Moscow and All Russia. Conductor Vladimir Spivakov, president of the Moscow International House of Music, a member of the Patriarchal Council for Culture, and Metropolitan Hilarion of Volokolamsk, chairman of the Moscow Patriarchate’s Department for External Church Relations, act as artistic directors of the Festival.

Before the concert, Metropolitan Hilarion of Volokolamsk greeted the organizers, participants and guests of this musical forum with the Feast of the Nativity of Christ.

According to Metropolitan Hilarion, the Christmas Festival of Religious Music was conceived as an international forum and a cultural event in order to introduce people to the spirit of the musical culture which was formed in the Church during many centuries and was reflected in the creative work of the greatest composers.

“I would like all concerts of the Festival to be united by the idea that the Lord is near, and I would like us to understand what messages composers of different epochs wanted to convey to us by their music: it was their love to God, reverence for the Lord, and their desire to convey to us this profound inner spiritual and religious feeling,” Metropolitan Hilarion said, in particular.

Metropolitan Hilarion wished the Festival to be a success and wished the participants and audience to better understand the purpose this music was composed for and to realize that the Lord is with and among us.

In the second part of the concert, the Moscow Synodal Choir, the Sveshnikov State Academic Russian Choir (headed by Yevgeny Volkov), and the Svetlanov Russian State Academic Symphony Orchestra (headed by Vladimir Yurovsky) performed the “Christmas Oratorio” by Metropolitan Hilarion of Volokolamsk. The “Christmas Oratorio” is based on the Gospel narration about the nativity and the first days of earthly life of Our Lord Jesus Christ. For writing the libretto, Metropolitan Hilarion used liturgical texts for the feasts of the Annunciation, Nativity of Christ and the Meeting of the Lord.

The next concert of the Third Christmas Festival of Religious Music will be held on January 12. The Choir of the Cathedral of St Alexander Nevsky from Sofia (Bulgaria) will sing hymns by Bulgarian and Russian composers.

Traditionally, the performance of the National Symphony Orchestra conducted by Vladimir Spivakov will complete the Festival programme.