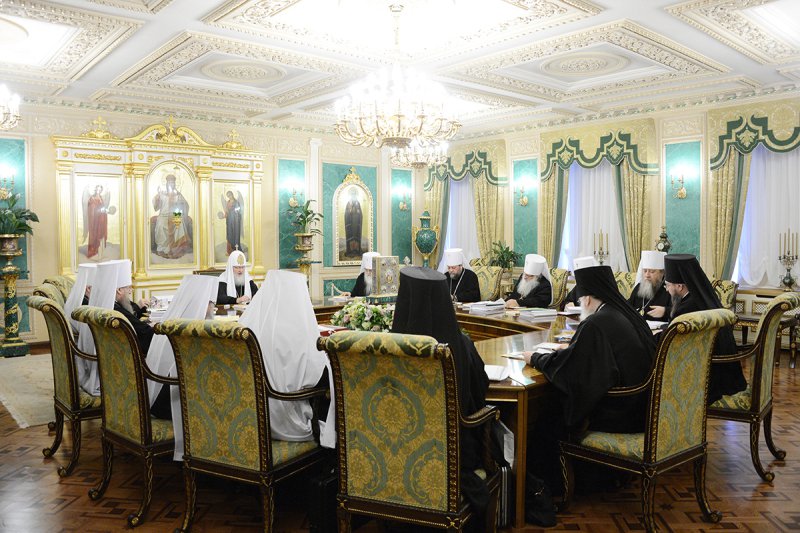 On 25 December 2012, His Holiness Patriarch Kirill of Moscow and All Russia chaired the last in 2012 session of the Holy Synod of the Russian Orthodox Church held at the Patriarchal and Synodal residence in St. Daniel’s Monastery.

Metropolitan Aleksandr of Astana and Kazakhstan and Metropolitan Vikentiy of Tashkent and Uzbekistan were also included as permanent members by the decision of the Holy Synod of 5 October 2011 (Minutes 99) pending approval by the Bishops’ Council.

Invited to the winter session (September 2012-February 2013) are Metropolitan Vladimir of Omsk and Tavricheskoye, Metropolitan Veniamin of Penza and Nizhniy Lomov, Archbishop Mark of Hust and Vinogradov, Archbishop Simon of Murmansk and Monchegorsk, and Bishop Savva of Tiraspol and Dubossary.

The Primate of the Russian Orthodox Church opened the session and addressed its participants with welcoming words.

His Holiness informed the participants of the agenda and noted that the Synod will have to consider a lot of documents.

“We shall consider a draft prepared by the Inter-Council Presence that will help our work for rehabilitation of drug-addicts. At first, it was planned to present the draft to the Bishops’ Council, but it was later decided to present it to the Synod for thorough examination. The draft would be proposed to the Church as a guiding document,” His Holiness said and added that “the Synod will have to meet the requests of some bishops to set up new dioceses in the territories of their canonical responsibility and to make decisions on the election of new bishops.’