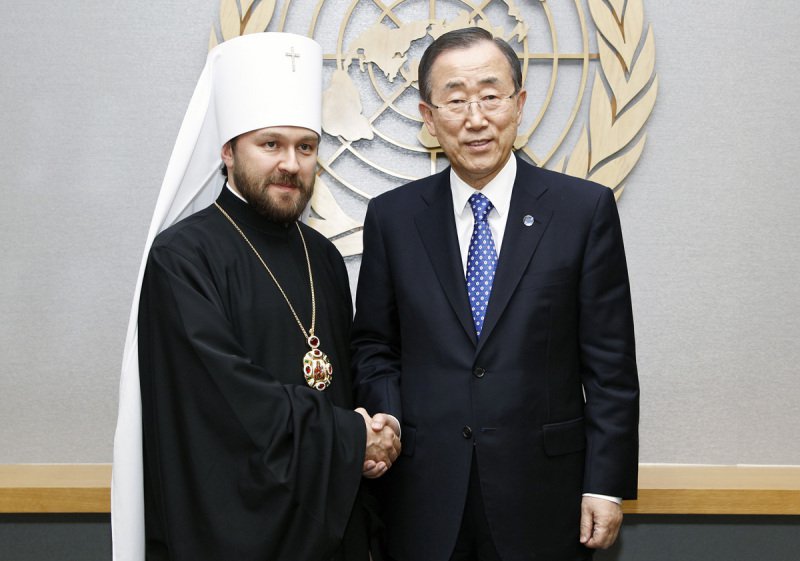 On 23 October 2012, Metropolitan Hilarion of Volokolamsk, Chairman of the Moscow Patriarchate’s Department for External Church Relations, met with Mr Ban Ki-Moon, Secretary-General of the United Nations, at the UN headquarters in New York.

The UN Secretary General warmly welcomed Metropolitan Hilarion and asked him to convey his best wishes to His Holiness Patriarch Kirill of Moscow and All Russia. Mr Ban Ki-moon noted the ever-growing role of religious communities in the solution of current social problems.

Metropolitan Hilarion presented the facts of discrimination against Christians in different regions of the world to Mr. Ban Ki-moon and underscored that opposition to this tendency was a priority part of the external ministry of the Russian Orthodox Church. The DECR Chairman noted the importance of upholding traditional moral values in social life.

Attending the meeting were Mr Vitaly Churkin, permanent representative of the Russian Federation to the UN, Grigiry Lukiantsev, senior counsellor at the Permanent Mission of the Russia Federation to the UN; Mr Leonid Sevastianov, executive director of the St Gregory the Theologian Charity Foundation; Hierodeacon Ioann (Kopeikin), assistant to the DECR Chairman; and Miguel Palacio, a DECR staff member.