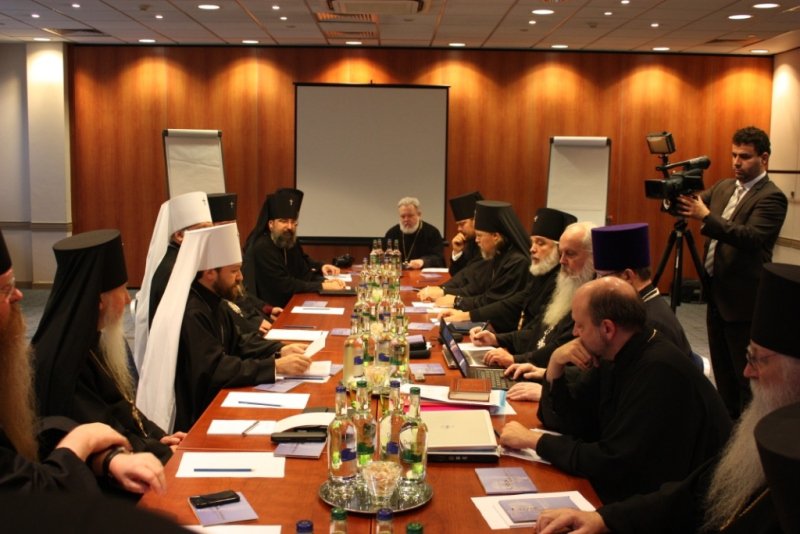 With the blessing of His Holiness Patriarch Kirill of Moscow and All Russia, the Conference of Russian Orthodox Bishops Serving in the Diaspora opened in London on October 19, 2012. The event marks the fifth anniversary of the signing of the Act of Canonical Communion.

After a prayer before the Kursk-Root “Sign” icon of the Mother of God, which had been brought to London for the event, Metropolitan Hilarion of Volokolamsk, Chairman of the Moscow Patriarchate’s Department for External Church Relations, opened the conference with a welcoming word on behalf of His Holiness Patriarch Kirill. Metropolitan Hilarion then read an introductory address, during which he said in particular: “One cannot but see the saving hand of God in the canonical unity which was manifested, which led both sides onto the path of constructive dialogue, positive cooperation, reconciliation and the achievement of full brotherly unity with each other.”

The conference participants were greeted by Metropolitan Hilarion of Eastern America and New York, First Hierarch of the Russian Orthodox Church Outside of Russia. He underscored that a double challenge faces the archpastors serving in the diaspora: to minister to people from Russia, Ukraine and Belarus living abroad, and to reveal the truth of Orthodox Christianity to the world, to do missionary work among the native populations of the countries where they serve.

All participants in the conference reported on the state of affairs in their own regions, focusing on cooperative efforts of dioceses and parishes and on analysis of the fifth anniversary of the reestablishment of unity. Sharing their views on this matter were Archbishop Mark of Berlin-Germany and Great Britain, Archbishop Kyril of San Francisco and Western America, Archbishop Gabriel of Montreal and Canada, Archbishop Mark of Yegorievsk, Archbishop Yelisei of Sourozh, Archbishop Anatoly of Kerch, Archbishop Michael of Geneva and Western Europe, Bishop Iov of Kashira, Bishop Agapit of Stuttgart, Bishop Peter of Cleveland, Bishop John of Caracas and South America, Bishop George of Mayfield and Bishop Nestor of Korsun.

The conference of archpastors of the Russian Orthodox Church serving abroad continued in accordance with the broad agenda they approved.