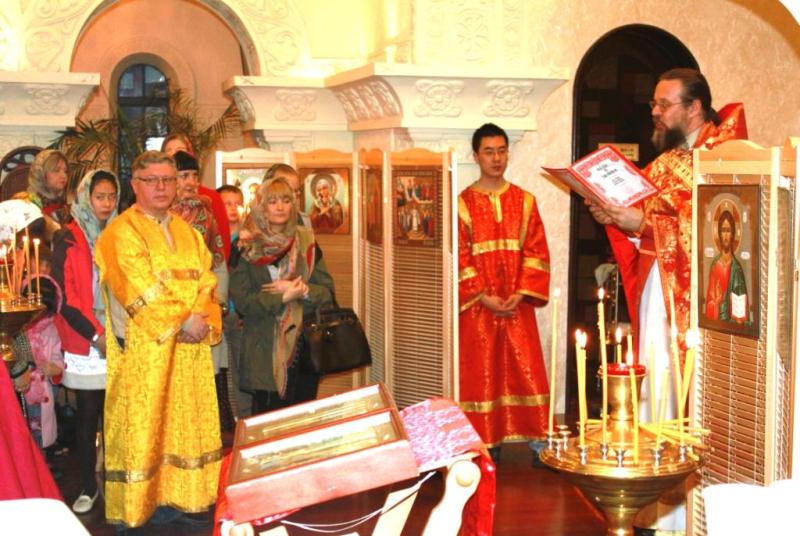 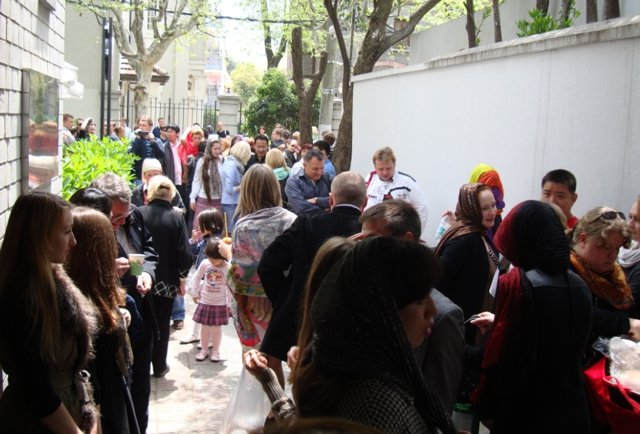 On April 15, 2012 a festive Paschal service was held at St. Nicholas Church in Shanghai. Local authorities gave a permit to conduct church services after a long delay: the last time the faithful gathered for prayer in this unique church remaining from the first Russian emigration, was exactly one year ago. At this time, to celebrate Orthodox Pascha, more than 300 “Russian Shanghaians” came to the church; of these more than 160 were communicants. For the first time of conducting services in the new century, the church could not accommodate everyone. In this regard, a fairly large group of our countrymen during the service was forced to remain on the steps of the church and on the street. By 11 o’clock most of them, due to lack of space, even moved into the roadway. Quiet Street Gaolan-lu became a piece of real Russia, and in areas adjacent to the temple area one could hear primarily Russian speech.

The service was attended by representatives of the Consulate General of Russia, Consul General of Ukraine and Belarus, the leadership of the Russian Club in Shanghai. At this time, a considerable part of the faithful who came to mark the Passover of Christ, made up of representatives of the Orthodox countries like Bulgaria, Greece, Serbia, Romania and others. Recall that permission for the resumption of services at St. Nicholas Church, under a lease, was first obtained by the Orthodox community for the duration of the Shanghai World Expo 2010. Prior to that worship services in the church were not conducted, and the temple was used for other purposes. The fate of the church remains in question. Unfortunately for us, this year in its facilities resumed its work as a coffee house. Despite the uncertainty of the situation around the church, the Orthodox believers and the Russian Club in Shanghai will continue its efforts aimed at the fact that the church should be a place of prayer and not of entertainment.

All assembled with great joy congratulated each other on the day of Pascha singing the Troparion: “Christ is risen from the dead, trampling down death by death, and upon those in the tomb bestowing life.” The Paschal Message of His Holiness Patriarch of Moscow and All Russia Kirill, read by Fr. Alexis Kiselevich, was heard with attention. The consecration of kulitch-cakes and eggs – a constant attribute of the holiday – took place, an especially joyful event in the life of the Shanghai congregation.

The Orthodox Community of Shanghai and the Russian Club in Shanghai held a tea party for everyone, with a presentation of children’s Paschal play, prepared by the pupils of our Sunday school “Kolosok.”

The play was based on the fairy tale by A.Volkov “The Wizard of Oz.” The plot of a new fairy tale differs from the original version in that the girl Ella with her friends Scarecrow, the Tin Woodman and the brave Lion do not go to the Emerald City to the magician Goodwin, but to the church to ask God for the help with their most cherished wishes. Various obstacles that are encountered on their way, help our heroes realize that these cherished desires can and should become, not money, not power and pleasure but love, patience, charity and humility. The wicked Bastinda, which builds its unsuccessful machinations, melts, of course, after she is sprinkled with holy water. “Pascha – this is when nature is reborn; Pascha – is when the Lord is resurrected, Pascha – this is when your heart is resurrected!” — Those are the final words uttered by heroes of the play, prepared by youngsters under the direction of our teacher E.I. Zhigarevoy.

The play was interesting not only for the many children who came to mark Pascha with their parents, but also for the adult audience. The applause and smiles received from the audience was a well-deserved reward, as well as the sweet Paschal gifts received by the young artists from the hands of Fr. Alexis.

Happy holiday to all! Christ is Risen!