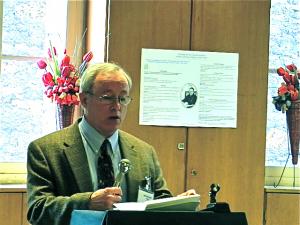 From 9 – 11 February, 2012, an international conference was held at St. Sergius Orthodox Theological Institute in Paris, France, to honor the 20th anniversary of the passing away of the theologian and church historian Protopresbyter John Meyendorff, who was Dean of St. Vladimir's Seminary from 1983 until 1992. The four sessions, with 24 speakers, devoted to the work of one of the most renowned Orthodox Christian theologians of the last century, attracted the attention of nearly one hundred participants.

The conference, titled "The Legacy of Fr. John Meyendorff, Scholar and Churchman (1926 – 1992),” began with words of welcome by the Rector of the Institute, His Eminence Archbishop Gabriel, and by the Dean, Archpriest Nicholas Cernokrak. His Eminence Kallistos, metropolitan of Diokleia, transmitted a message from the Ecumenical Patriarch, His Holiness Bartholomew. Then Dr. Joost van Rossum, professor of History and Theology of the Byzantine Church at the Institute (and alumnus of St. Vladimir's Seminary) delivered the keynote lecture, entitled “Fr. John Meyendorff: A Life Dedicated to Scholarship and to the Church.”

Fr. Meyendorff was first of all known for his studies on the Byzantine theologian St. Gregory Palamas (14th century), whose theology can be considered as a true patristic synthesis. For this reason, the initial lectures were dedicated to the notion of “neo-patristic synthesis,” which had been introduced for the first time by Fr. Georges Florovsky, and which had been resumed by Fr. John. The initial lectures included: Metropolitan Kallistos Ware, “Father John Meyendorff and ‘Neo-Patristic Synthesis’” ; Fr. Nikolaos Loudovikos, “John Meyendorff and the Possibilities of a Modern Patristic Exegesis” ; Dr. Ivana Noble, “Patristic Synthesis or Non-Synthetic Dialectics? A Critical Evaluation of John Meyendorff's Contribution."

The main theme of the scholarly discussions on Gregory Palamas in the last century had been the relationship between the theology of the hesychast theologian and the system of the “hierarchies” of Dionysius the Areopagite (or the “Pseudo-Dionysius”, the anonymous author of some writings which date from the end of the 5th century). In his Doctoral Dissertation, submitted at the University of Paris (Sorbonne), A Study of Gregory Palamas (Introduction à l’étude de Grégoire Palamas), Fr. Meyendorff — therein following the intuition of Fr. Georges Florovsky — had upheld the thesis that Palamas has applied a “Christological corrective” to the writings of Dionysius on the “Celestial Hierarchy” and the “Ecclesiastical Hierarchy,” the language of which is marked by a Neo-platonic flavor.

Some Orthodox theologians have disputed this interpretation by Frs. Meyendorff and Florovsky, in particular, Fr. John Romanides. Some of the speakers in the next set of lectures shared the opinion of Romanides: Fr. Andrew Louth, “Dionysius, Maximus, Palamas — and Meyendorff?” ; and Pantelis Kalaitzidis, “John Meyendorff and John Romanides: Two Different Approaches to Palamite Theology.” However, Mr. Goran Sekulovski, lecturer in Patristics at the Institute, in his talk entitled, “Fr. John Meyendorff, Reader of Dionysius the Areopagite,” underlined the importance of Fr. Meyendorff’s study, in which the author points out that Palamas had replaced the mysticism of Dionysius within the context of the mystery of the Incarnation of Christ, which underlies all Christian spirituality and mysticism. For this reason, Mr. Sekulovski argued, there is no doubt that this study of Fr. Meyendorff still remains the basic study on this Byzantine theologian.

Two more lectures were dedicated to the theology of St. Gregory Palamas: Dr. Serge Horuzhy treated the relation between Palamite theology and ancient and modern philosophy ( “Energy and Personality in the Theology of John Meyendorff and in Contemporary Philosophy”); and Dr. Stoyan Tanev reflected on the notions of “Sophia” and “Energy” in Byzantine and modern theology ( “Divine ‘Sophia’ and ‘Energeia’ in 14th and 20th Century Orthodox Theology”).

The second focus of Fr. Meyendorff’s theological interest was Christology. Mr. Jean-François Colosimo, lecturer in Patrology at the Institute and alumnus of St. Vladimir’s Seminary, presented a paper on ‘‘The Paschal Christology of John Meyendorff,’’ in which he pointed out that Fr. John has corrected a certain tendency in Orthodox theology to ignore the factor ‘‘time’’ in the economy of salvation.

For Fr. Meyendorff, theology was not merely a speculative matter, but linked to the life of the Church in all its aspects. Other presentations dealt with certain subjects that were not the specialty of Fr. Meyendorff’s scholarly work, but in which he nevertheless had taken interest. Dr. André Lossky, professor of Liturgical Theology at the Institute, presented a paper on ‘‘The Feast of the Transfiguration as Witness to the Light,’’ in which he pointed out the theological meaning of the liturgical texts of that feast and their relationship to the theology of Gregory Palamas. Fr. Nicholas Ozolin, professor of Iconology at St. Sergius, explained the link between the theology of the icon and Christology (“Fr. John Meyendorff, Theologian of the Icon”). Two more lectures concerning the icon, presented by two other alumni of St. Vladimir’s, dealt with the Christian image in its cultural context: Fr. Stephan Bigham showed the link between Romanesque and Byzantine art (“Romanesque Art: the Last Western Art of Iconic Character”); and Dr. Alexander Dvorkin spoke about the influence of Western culture on the political and cultural life in Russia in the 16th Century (“Western Influences on Church Life in Muscovy in the First Half of the 16th Century”).

A special session was dedicated to the History of the Church, since Fr. Meyendorff was a renowned expert on the history of Byzantium and the Slavs. Dr. Pavel Pavlov presented a paper on the relationship between Gregory Palamas and the Islamic world (“Palamas’ View on Islam: Byzantine Insights for Contemporary Society”). Dr. Marie-Hélène Congourdeau presented a paper on ‘‘Nicholas Cabasilas and his defense of Gregory Palamas against the ‘trifles’ of Nicephoros Gregoras.” Dr. Marie-Hélène Blanchet presented an analysis of the development of the use of the term "katholikos" in Byzantium ("The Different Meanings of the Term ‘katholikos’ in Byzantium at the End of the Middle Ages: a Confessional Controversy”). Finally, Dr. Constantin Vétochnikov presented a paper on “The Patriarchal Missions in the Russian Lands during the 14th and 15th Century.”

Transitioning to the last section of the rich and diverse program, dedicated to the Church in the contemporary world, a young scholar from Yekaterinburg, Mr. Andrey Levitskiy, talked about the activities and publications of Fr. Meyendorff in Russia (“Fr. John Meyendorff’s Publications in Russia: the Story of a ‘Memorial Festschrift’") and the circumstances around the notorious “autodafé”— burning of books of, among others, Fr. Meyendorff and Fr. Alexander Schmemann, which had been organized in Yekaterinburg by Church authorities in 1998.  During the last section, the lectures also touched on the role that Fr. Meyendorff had played in the Ecumenical Movement: Fr. Nicolas Lossky (St. Sergius Institute),  Fr. John Meyendorff and the Ecumenical Movement  ; Dr. Nicholas Kazarian (St. Sergius Institute), “Fr. Jean Meyendorff and the WCC.” Protopresbyter Boris Bobrinskoy, former Dean of St. Sergius, presented a paper on "Palamite Pneumatology in the Context of My Contacts with Fr. John Meyendorff," in which he showed that Fr. Meyendorff had detected a possible breakthrough in the dead end, ancient controversy on the Filioque.

The last lectures of the final section and of the conference itself were devoted to the jurisdictional situation of the Orthodox Church, in particular in America. Dr. Michel Stavrou, professor of Dogmatic Theology at the Institute, delivered a presentation on "The Role of the Ecumenical Patriarchate in the Ecclesiological Vision of Fr, John Meyendorff." The final speaker, Dr. Paul Meyendorff, son of Fr. John Meyendorff, presented a talk on the role of his father in the establishment of the autocephaly of the Orthodox Church in America, which until now has not been officially recognized by the Patriarchate of Constantinople and other autocephalous Churches: "Fr. John Meyendorff's Role in the Autocephaly of the Orthodox Church in America.” Discussion on the paper underlined that, for Fr. Meyendorff, the primacy of a Patriarchate or the autocephaly of a Church were not ends in themselves, and that unity of the Church is of prime importance.

During a Round Table discussion, an interview between Fr. Nicholas Ozolin and Fr. Meyendorff was shown, which had been broadcast on the French television in the eighties. Several participants then shared their memories of Fr. John. Dr. Paul Meyendorff remembered the last moments of his father’s life: his last words before dying were "the Eucharist," and these words revealed that his theology and spiritual life were focused on the Eucharist and on eschatology. “At that moment," Dr. Meyendorff said, “ my father was already there, in the Kingdom of God.”

In his concluding remarks, Dr. van Rossum observed that Fr. Meyendorff shared this common eucharistic and eschatological vision with his friend and colleague Fr. Alexander Schmemann, “The roots of this theological vision were given to them by their alma mater, St. Sergius Institute,” Dr. van Rossum concluded.