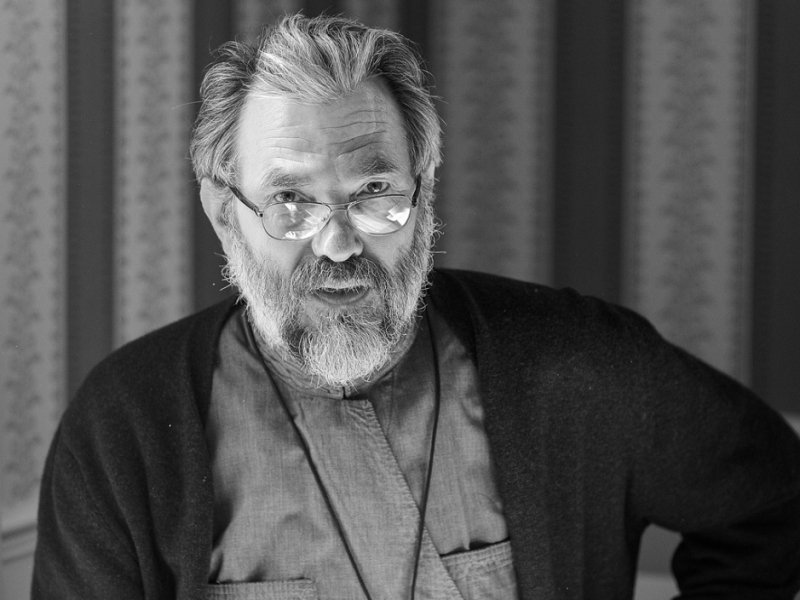 Compassion with Love
Чернокрак Николай, протоиерей  —  14 сентября 2012
The rue de Crimée is an ordinary street in Paris. Yet go through the gates and into the courtyard and you find yourself in a different world. The noise and bustle of the big city disappears and you are in an oasis of unearthly quiet and peace. This is where the Orthodox Institute of St Serge hides. The builidings are old. The steps are worn down. On the doors of the church there is a two-headed eagle. But nowhere does it feel tired and worn out by age. There is a vibrant, warm feeling of a living joy in faith. Bogoslov.ru presents its readers with an interview with Archpriest Nikolai Chernokrak, lecturer at the Orthodox Institute of St Sergius.
Статья
Религия и мир Религиозное образование и воспитание
Богословие

Fr Nikolai, tell us a little about how theological education works in France.

The church and state in France have been separate since the beginning of the 20th century. Therefore, all religious schools are separate from the state. Today all church schools and institutes have the status of private schools. However, there are some educational institutions which have some cooperation with the minsitry of education and therefore have official government status. For example, our institute Saint Serge is recognised by the ministry of Education as an independent Institute of Higher Education; the Ministry even helps us financially. But we are still a completely independent school and can develop our programme of study quite freely.

Does that mean that they donʼt prescribe what you teach?

Yes. Three years ago we signed an agreement with the ministry. On their side they asked us to inform them of the number of students, their country of origin and level of education. This is needed because all private institutions contribute to a kind of national state register. Our theological school, however, is the only spiritual school with official status.

Tell us something about the institute.

The St Sergius Institute was opened in 1925 and within two years received accreditation with the state as a higher theological school in France.

There are three periods in the history of the institute. The first is from 1925 to the 50s. At this time the elite of Russian Orthodox theologians, philosophers and religious activists were working at the instute and the students were from the first wave of emigration. They were continuing and developing Orthodox religious thinking in the tradition of the old Russian academies – Moscow, Kazan and Kiev. This was reflected in the design of the study programme. In essence it was a church school, but wasnʼt called a seminary or academy. Those old professors preferred to call it an institute, perhaps reminding them of the theological institute that was opened for a brief time in St Petersburg at the beginning of the 20s. As it turned out, our institute was opening just at the time when all the theological schools in Russia were being closed. It was here that theological work and creativity continued. After the 50ʼs there was the second generation of teachers.

Where did this generation come from?

The Russian emigration was very strong at that time. For example, Fr. Alexei Knyazev, who had come to France as a 10 year old boy, graduated from the law faculty and (then the) faculty of theology and taught for us before becoming the rector. That was the second generation. We lived off memories, tales handed down about the old professors. Even if we hadnʼt seen them in the flesh, we recognised them straight away on photographs. We knew about them, we knew about their characters. We had that living heritage in the second generation. In its work of continuing to develop Orthodox theological thinking, the institute began to have dialogue with other Christian confessions. At first it was with the Protestants, as they were more open, and then with Anglicans and Catholics. At that time the institute had its mission: to acquaint the West with Orthodox teaching, theology and culture.

Things went on like this until 1974-1975. My generation was the last to have all lectures in Russian. Olivier Clement, a pupil of Vladimir Lossky, gave his lectures in French; he understood and read Russian, but did not speak it.

Now weʼre already onto the third, even the fourth, generation. Again there is something new. Orthodox schools are opening in many of the countries of the former USSR and they are developing their own spiritual education. What is more, today our institute does not just take Russian students. We have students from Africa, the Middle East, Syria, Ethiopia (I received a nun from Egypt recently) and, of course, from Eastern Europe.

How do you design your programme of study?

We joined the Bologna Convention more than ten years ago. Therefore, we have three cycles: the bachelor (baccalaureate) programme, the masters programme and the doctoral level. If we translate this to the Russian system, then it equates almost exactly to the system pre-Revolution. The programme does not just include lectures, but tries to teach students to work independently.

These days many of our lecturers do not speak Russian. After all our teachers have come from Greece, Holland, Yugoslavia and America.

What disciplines are taught in the Institute?

Do you have any preferred subjects?

From the very beginning our old professors put a lot of work into the “neopatristic synthesis”, as it is called, as our school is very attached to the Church Fathers. You could even say that Church Fathers and liturgical theology was developed by our professors, starting with Fr. Cyprian Kern, Fr. Nicholas Afanasiev and Fr Alexander Schmemann, are at the heart of our programmes. Today we have a young professor – Andrei Lossky – who is developing this theme. Fr. Nikolai Osolin has developed the whole area of teaching about icons. He has taken a step away from art history towards the place the icon has in the development of Orthodox theological thought. We also think dogmatic theology is really important. We have our own points of view on these disciplines. We also insist that students learn Greek thoroughly because it is difficult to study theology without it.

Where do the students live?

We have a small residence where about 20 men can live. The rest find their own lodgings in the city.

Do they have any duties to carry out?

We are not very strict, so they have no duties, apart from laying the table and keeping their rooms clean.

Do students pay for tuition?

Yes. We are a private school we have neither a rich Church nor sponsors backing us. We live more for ideals than money. It is a constant miracle that we are still in existence!

What are the qualifications for becoming a student? What do you require?

Our first requirement is to have a good brain. More seriously, a desire to study theology is essential and, unfortunately, to know French, as our lectures are in French. What is more, Paris, as you remarked, is not a cheap place to live. Therefore a student needs to have means to support him or herself. We sometimes help students, but it is never much.

Are there entrance exams?

Yes, there is a formal exam to check general knowledge. We also look through a studentʼs records to make sure of the level of education and what has been studied.

Are there age limitations?

No there are no limitations. You can study with us after 40 and after 50. So, why donʼt you sign up? (laughs).

How many of the students complete the courses they start?

Last year about 20 people graduated: about 10 at masterʼs level and the rest at bachelor level. Itʼs not a lot but it is sufficient for us.

Very good, as you saw. The school is small and the lecturers set the tone. Just as in Russia some are strict and some are not so strict. We are like a family.

Are the students obliged to go to services?

We do require that the students attend services. We have kept Church Slavonic for the services because it has turned out to be easier to teach in French rather than pray in French. Even though we have students who do not understand Slavonic, they come along and pray. We have services every morning and evening, just as they do in the Russian theological schools.

What other theological schools are there in France?

About 5 years ago a Russian theological seminary opened in Paris. This is a kind of centre where there are courses for students who can then defend their masters or doctoral dissertations at other universities. We have good relations with the seminary. I teach there and am friends with them all.

With regard to Catholic schools: there are many in France. There is an ecumenical institute under the Catholic University and our lecturers teach Orthodox theology there. There are students from many different countries and sometimes they have not heard of Orthodoxy. That gives us an opportunity to acquaint them with Orthodox theology. Some of the students from the Ecumenical Institute study with us for masters degrees. Sometimes we organise seminars or lectures. Last year, for example, we organised a course on the Old Testament, according to the Septuagint, where Orthodox and Protestants looked at the specifics of the Septuagint in comparison with the Masoretic texts. St Serge is known as a Russian theological institute, as a centre of Russian theological thought which developed its work in France and the whole Orthodox world while the church in Russia was undergoing persecution.

Fr. Nikolai, what kind of relationships do you have with the theological schools in Russia, in particular the academies in Moscow and St Petersburg?

Last year when I was in the Moscow Theological Academy we signed an agreement on cooperation. We long ago agreed something similar with the St Tikhon University. Whenever possible we invite lecturers from Russia to conferences and they invite us. We travel to Russia most years.

What is your judgement of the situation in Russia?

I have nothing to say really, as I love Russia very much. Just the one thing: the Russian Church is just beginning to walk like a toddler. So that a toddler doesnʼt fall over he needs a hand or even a finger to hold on to. Criticism should be directed at specific situations. That is not my style. I wouldnʼt dare criticise in general as that has no point. You know, I have great sympathy for Russia. Sympathy in the Greek sense: fellow feeling. Fellow feeling for all that happens in Russia. Fellow feeling with love.