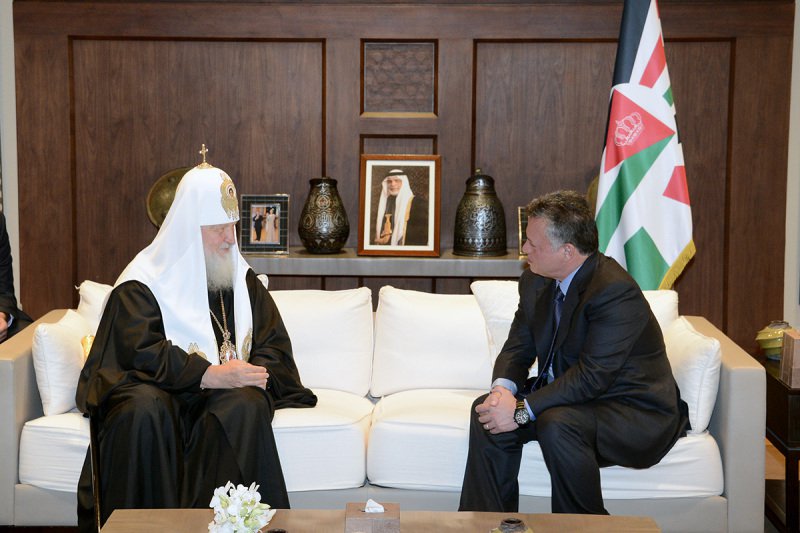 November 14, 2012 – His Holiness Patriarch Kirill of Moscow and All Russia and His Beatitude Patriarch Theophilos of Jerusalem and All Palestine met with King Abdullah II bin al-Hussein of Jordan at the Royal Palace in Amman.

Present at the meeting were Metropolitan Hilarion of Volokolamsk, head of the Moscow Patriarchate’s department for external church relations, Archimandrite Isidore, head of the Russian Ecclesiastical Mission in Jerusalem, and A. Kalugin, Russia’s Ambassador to Jordan.

Patriarch Kirill thanked the King of Jordan for the exceptional attention the royal family has given to the needs of the Russian Orthodox Church. Thanks to their support and continued assistance, it has become possible to obtain a plot of land on the Jordan River for building a hospice on it. His Holiness Kirill noted that the implementation of this project was a result of cooperation between the Kingdom of Jordan and the Russian Federation owing to an agreement reached on this matter by the heads of the two states.

Among the topics discussed at the meeting was also the development of pilgrimages.

The King of Jordan said he was glad to meet with His Holiness Patriarch Kirill of Moscow and All Russia for whom he feels a great respect. King Abdullah II bin al-Hussein also noted the importance of cooperation with the Russian Orthodox Church.