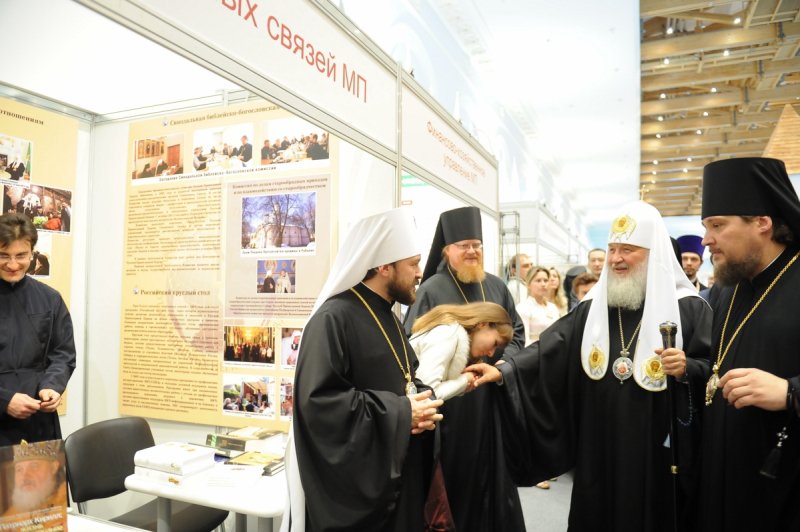 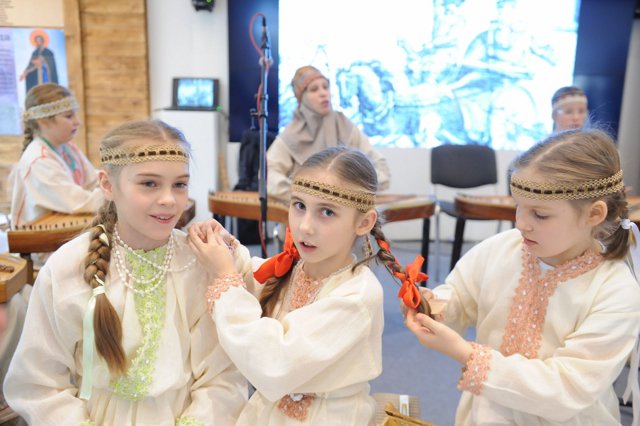 On 4 November 2012, after the Divine Liturgy was celebrated at the Cathedral of the Assumption in the Moscow Kremlin, His Holiness Patriarch Kirill of Moscow and All Russia led the opening ceremony of the 11th exhibition-forum “Orthodox Russia – for the Day of National Unity.”

The exhibition at the “Manezh” Central Exhibition Hall coincides with the two feasts celebrated in Russia on November 4: the Day of National Unity and the commemoration of the Kazan icon of the Mother of God. The exhibition is the largest church-public project in Russia.

The main topic of the forum this year is “Church, Authority and People. Lessons of Overcoming the Time of Troubles and Finding Unity”.

Meeting His Holiness at the entrance to Manezh were Vladimir Medinsky, Russian Minister of Culture; Alexander Beglov, Presidential Plenipotentiary Envoy to the Central Federal District; Leonid Slutsky, chairman of the State Duma Committee for CIS affairs and relations with compatriots; Sergei Trofimov, president of the ‘Restek’ corporation; and leaders of the traditional confessions in Russia.

Attending the ceremony also were Alexander Zhukov, first deputy chairman of the State Duma; Sergei Stepashin, chairman of the Accounts Chamber; and Svetlana Medvedeva, chairperson of the Board of Trustees of the special integrated programme for the Development of Spiritual and Moral Culture of the Younger Generation of Russia.

By tradition, an icon was brought to the exhibition. This year, the visitors can venerate the “Kazan” miraculous icon of the Mother of God from the Kazan Cathedral of St. Petersburg. Meeting His Holiness at the icon were Igor Divinsky, Vice Governor of St. Petersburg; and Bishop Mstislav of Lodeinoye Pole, a vicar of the St. Petersburg diocese. Troparion was sung, is Holiness venerated the icon and addressed the visitors and organizers with his primatial address.

Alexander Beglov read out a message for the head of the Russian State, Vladimir Putin.

His Holiness the Patriarch and guests of honour took a tour of the mentioned displays.

The one dedicated to the life and work of St. Nicholas of Japan Equal-to-the-Apostles is presented by the Moscow Patriarchate’s Department for External Church Relations. The visitors can learn about the beginning of the ministry of the Enlightener of Japan, about the work of the Russian Ecclesiastical Mission which he founded in Japan, translations of the Bible and of the liturgical books into the Japanese language, and also about the life of the Japanese Autonomous Orthodox Church at present and many other things and documents, including the Holy Synod’s decision to canonize him and Tomos on the autonomy. A special part of the display is dedicated to His Holiness Patriarch Kirill’s visit to Japan last September.

Archimandrite Tikhon (Shevkunov), abbot of the Sretensky stavropegic monastery and executive secretary of the Patriarchal Council for Culture, showed His Holiness over fifty competition designs of the monument to the Holy Martyr Hermogen, Patriarch of Moscow. The monument will be erected in the Alexandrovsky Garden by the wall of the Moscow Kremlin.

His Holiness also saw of the Synodal departments’ stands and the stands of other church and pubic organizations, monasteries, dioceses, publishing houses and various foundations.

At the stand of the Publishing House of the Moscow Patriarchate, the first volume of the Collection of Works by His Holiness Patriarch Kirill of Moscow and All Russia was presented. This volume is from the series called “The Primate’s Word” and contains official materials on the first three years of patriarchal ministry.