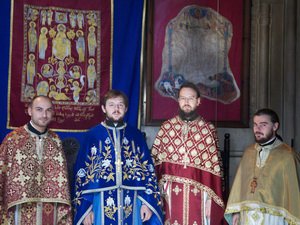 The aim of the MTA’s visit to the main institution of the Georgian Orthodox Church was to discuss the format of cooperation between the theological schools, as well as preliminary discussions about a bilateral cooperation agreement, which will be signed in the Moscow Theological Academy during the return visit of the delegation from Tbilisi.

During their visit to Tbilisi Theological Academy representatives met with Protopresbyter George Zviadadze, rector of the Academy, representatives of the administration, staff and students of theological schools.

During the meeting with teachers and students of Tbilisi Theological Academy, Archpriest Pavel spoke about the reform of religious education in Russia, theological IT projects, and the prospects for cooperation between the MTA and theological schools of the Georgian Church. In turn, Father Anthony Borisov described the development of international activities in the MTA. Then the MTA delegates answered numerous questions from the audience, which ranged from the specifics of the curriculum in their Academy to the possibilities for Georgian students to do graduate and postgraduate studies at the Academy.

During the meeting, films from the “Bogoslov” film studio were shown, on the Moscow Theological Academy and on the web-portal "Bogoslov.Ru", as well as the video channel of the film studio on YouTube.

In conclusion, Archpriest Pavel Velikanov, on behalf of Archbishop Evgeny, Rector of the MTA, gave as a gift to the Georgian Patriarchate a portrait of Archpriest Constantine Ruzhitsky, Rector of the Moscow Theological Academy, during whose rectorship the future Catholicos-Patriarch Ilia II was a student at the Academy.

The delegation also reviewed the progress of major repair works to a building that will house the Tbilisi Theological Academy. The building is designed for two thousand students and will have accommodation for a hundred people. Repair works started at the beginning of 2012 with full funding from the state and are planned to be completed by the beginning of the school year.

Representatives of the MTA had the honour to be accepted by the Chairman of the Education Committee of the Georgian Orthodox Church, Metropolitan John of Rustavi and Marneuli. During the meeting both groups discussed the prospects for cooperation of theological schools of the Georgian and Russian churches, as well as the experience of having received state accreditation of Georgian theological academies and seminaries in 2011.

During the visit the delegation visited the ancient monasteries Svetitskhoveli, Santavro, Alaverdi and other holy sites of the Georgian land.