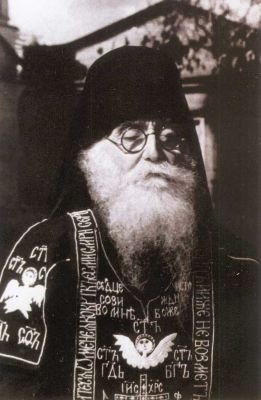 On St. Thomas Sunday, April 22, His Beatitude Metropolitan Vladimir of Kiev and All Ukraine officiated at the Divine Liturgy celebrated in the Church of SS Anthony and Theodosius at the Dormition Lavra of the Caves in Kiev.

Concelebrating with His Beatitude were Metropolitan Pavel of Vyshgorod and Chernobyl, abbot of the Lavra; Archbishop Antoniy of Borispol, head of the Department for External Church Relations of the Ukrainian Orthodox Church and Rector of the Kievan Theological Schools; Archbishop Alexander of Pereyaslav-Khmelnitsky and Vishnevoye, secretary of the Primate of the Ukrainian Orthodox Church; Bishops Nikodim of Zhitomir and Novograd-Volynskiy, Ilariy of Makarov, Panteleimon of Vasilkov, and ordained monks of the Lavra.

At the Little Entrance, His Beatitude Metropolitan Vladimir elevated Bishop Nikodim of Zhitomir and Novograd-Volynskiy to the rank of archbishop.

The office of canonization of Schema-Archbishop Anthony (Abashidze; +1942) as a locally venerated saint was performed during the divine service. Archbishop Alexander read out the decision of the Holy Synod of the Ukrainian Orthodox Church of 14 June 2011 (minutes 21) to enter the name of Schema-Archbishop Anthony into church calendar. Archbishop Antoniy of Borispol told all those present about the life of the saint. His icon was brought to the middle of the church, and His Beatitude, archpastors, clergymen and laymen venerated the relics of the newly canonized saint, reports the website of the Ukrainian Orthodox Church.

Schema-Archbishop Anthony (secular name David Iliych Abashidze) was born in Georgia in 1847. He graduated with distinction from the Law Department of the Novorossiysk Imperial University in Odessa in 1891 and that same year entered the theological academy. He was tonsured with the name of Dimitry at the age of twenty-four. In 1897 he was appointed inspector of the Kutaisi theological seminary, and in 1898 – inspector of the Tbilisi theological seminary. It was he who expelled Joseph Dzhugashvili, better known as Stalin, from the seminary. Bishop Dimitry was appointed Bishop of Tauris and Simferopol in 1912.  When he was in Moscow for the Local Council of 1917-18, he would walk along the streets with his first-aid kit and give help to those wounded in the battle for Moscow. Bishop Dimitry was arrested and exiled from the Crimea in 1923 and settled in the Kitayevsky Hermitage which belonged to the Lavra of the Caves in Kiev and was located some nine kilometers from it. He made a vow of silence and took the Great Schema with the name of Anthony. He was revered as a great ascetic, a man of prayer and clairvoyant elder. Orthodox Christians from Russia, Ukraine, Belarussia and Georgia came to him for advice. He died in 1942 and was buried behind the sanctuary wall of the Church of the Elevation of the Cross at the entrance to the Near Caves.