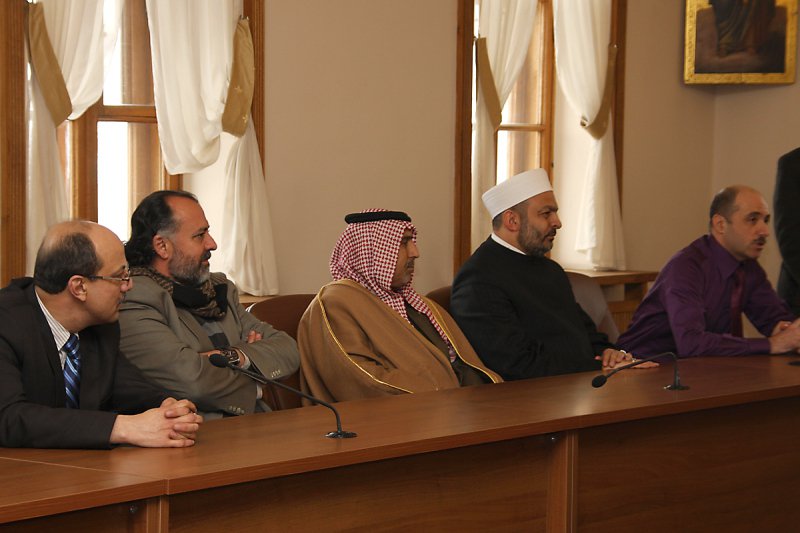 On February 16, 2012, DECR vice-chairmen Archpriest Nikolay Balashov and Hegumen Philaret (Bulekov) met with a Syrian delegation who came to Russia on the previous day. Participating in the meeting were Bishop Luke of Seydnaya, vicar of the Patriarch of Antioch and All the East, Sheikh Alaa Eddin Zateri and actors Mohammad Hadi Bagdounes and Mohammad Zuheir Abdelkarim. From the DECR there were also Archpriest Sergiy Zvonarev, DECR secretary for far distant countries, Fr. Stephan (Igumnov) and Mr. M. Palacio, DECR staff members.

Archpriest Nikolay Balashov welcomed the guests and described for them the work of the Department for External Church Relations. He pointed to the invariably high level of interreligious relations and the peaceful co-existence and cooperation of various religious communities in the Syrian society. Fr. Philaret shared the memories of his work as Russian Orthodox Church’s representative to the Patriarch of Antioch and all the East in the period from 1996-1999 and pointed out that there were always friendly relations between the peoples of Russia and Syria.

Bishop Luke thanked them for the welcome and asked to convey greetings to His Holiness Patriarch Kirill of Moscow and All Russia and to Chairman of the Department for External Church Relations Metropolitan Hilarion of Volokolamsk.

Sheikh Alaa Eddin Zateri stressed that negotiations were the only way of achieving peace in Syria. He said that extremism, which is persistently propagated in the Middle East at present, has nothing to do with religious beliefs.

After the talk, which was held in a friendly atmosphere, the sides exchanged tokens of the meeting.