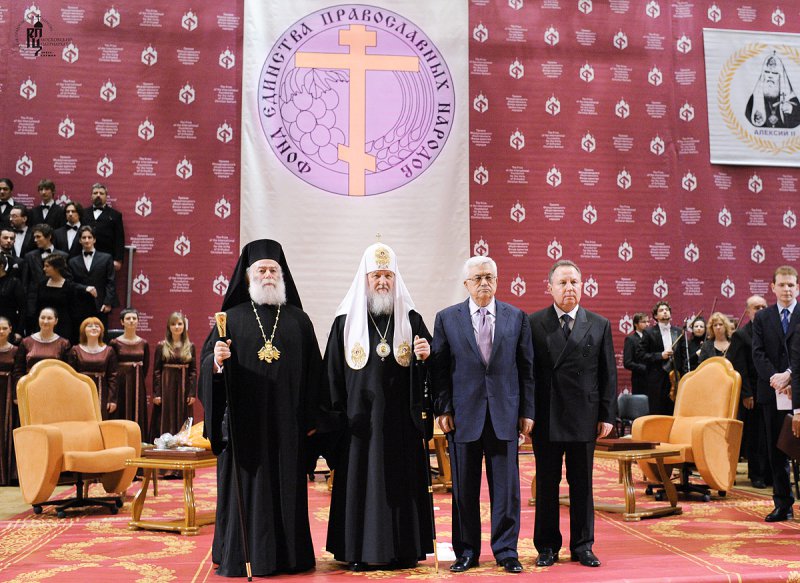 On 21 January 2012, in the Hall of Church Councils of the Cathedral of Christ the Saviour, His Holiness Patriarch Kirill of Moscow and All Russia officiated at the ceremony of awarding the prize ‘For the Outstanding Activity in Strengthening Unity of Orthodox Christian Nations and for Consolidation and Promotion of Christian Values in the Life of Society” named after His Holiness Patriarch Alexy II.

The prizes of the International Foundation for the Unity of Orthodox Christian Nations (IFUOCN) are awarded annually to the heads of states, governments and parliaments, Primates of the Orthodox Churches, and major public figures for their contribution to the strengthening of economic and political ties among the states formed in the context of Eastern Christian tradition and for the consolidation of noble standards of Christian morals in the life of Orthodox community.

The IFUOCN-2011 prizewinners are His Beatitude Patriarch Theodoros II of Alexandria and All Africa; Mahmoud Abbas, President of the Palestinian National Authority; and Serbian tennis player Novak Djokovic.

A documentary film about the history of the IFUOCN was shown before the ceremony. The IFUOCN president, Prof. Valery Alexeyev gave an opening speech and asked His Holiness Patriarch Kirill of Moscow and All Russia, president of the IFUOCN Board of Trustees, to open the awarding ceremony.

The Primate of the Russian Church welcomed the prizewinners and the guests and, together with Prof. Alexeyev presented diplomas and badges to the prize-winners-2011.

His Beatitude Patriarch Theodoros II noted the importance of awarding the ancient and glorious Church of Alexandria in the person of her Pope and Patriarch and expressed his confidence that this award reflects “our relations of cordial love in Christ, cooperation and unanimity to the glory of our God.”

His Beatitude added that that the prize was recognition of the contribution of the Church of Alexandria to the shaping of Christian theology and of her missionary efforts undertaken for the spreading of Good News on the blessed African continent.

The President of the Palestinian National Administration Mahmoud Abbas underscored in his address that he highly appreciated the life and spiritual heritage of the late Patriarch Alexy II. He expressed his joy over receiving the prize from His Holiness Patriarch Kirill whom he considers a worthy successor of Patriarch Alexy II.

Mahmoud Abbas said that the prize would be an incentive for continuing his efforts directed to the spreading of the culture of peace and dialogue among civilizations, religions and nations and to the support of the values of tolerance. He is convinced that the adherence to these values is particularly important in the period of the current structural transformations in the Arab world.

“We feel a particular and great responsibility for Palestine’s preserving its civilization role in the region and in the world, as Palestine is the land of Divine Messages. We continue our efforts focused on the achievement of peace with justice and establishment of the independent State of Palestine, living near Israel, within the borders of 1967,” he said.

In conclusion of his speech, Mahmoud Abbas thanked the Primate of the Russian Orthodox Church and the IFUOCN leaders for the award and said that he would give prize money to Palestinian students who study in Russia.

Novak Djokovic, who could not attend the ceremony, said in his video address that an international award given to him in Russia is great privilege to him. “The Russian Orthodox Church gives a worthy example to the entire Orthodox world. There had been hard times in her history, she was persecuted, but no one managed to break it. At present it flourishes. This is an example for us, the Serbs, and we cherish hope that hard time for us will soon be over,” he said. He thanked His Holiness Patriarch Kirill and the IFUOCN on behalf of himself and the Serbian people for high award.

H. E. Jelica Kurjak, Ambassador Extraordinary and Plenipotentiary of Serbia to Russia, read out greetings from His Holiness Patriarch Irenej of Serbia to the participants in the ceremony.

The award ceremony concluded with a concert.