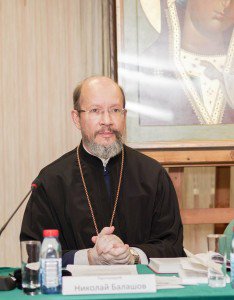 November 1, 2012: at St. Tikhon University of the Humanities, in celebration of the 20th anniversary of St Tikhon’s University, a presentation of a monograph series took place, entitled "Church Reform (The Local Council of 1917-1918)." The presentation was attended by the authors and publishers: Archpriest Nikolai Balashov, the academic editor of the series, and Deputy Chairman of the Department for External Church Relations of the Moscow Patriarchate; Archimandrite Sava (Tutunov), Deputy Head of working affairs at the Moscow Patriarchate, and the head of control and analytical services of the Office of the Moscow Patriarchate; Parravichini Giovanna, academic researcher at the Fund "Christian Russia", cultural attaché of the Embassy of the Russian Federation in the Vatican; senior fellow of the Institute of Russian History, Russian Academy of Sciences, Dr EV Belyakov,; AG Kravetsky, Candidate of Philology, senior researcher at the Institute of the Russian Academy of Sciences,.

The host of the evening was Fr George Orekhanov, the vice-rector for international work of St. Tikhon's University, who opened the presentation, stressing the particular importance of the series for modern church life. The authors described the history of their research and his development, and introduced guests to a summary of their work, highlighting the salient points.

Published books include "A Roundtable on Religious Education and Diakonia" in cooperation with the publishing house "Spiritual Library", with the support of the Italian Foundation "Christian Russia." Currently, a series of monographs have been issued: "On the Way to Liturgical Revival" by Archpriest Nikolai Balashov, "The Russian Church on the eve of change (late 1890 - 1918)," by Sergey Firsov, "The Ecclesiastical Court and Problems of Church Life" by Elena Belyakova, "Diocesan Reform" by Abbot (now Archimandrite) Sava (Tutunov), and "Church Mission in a Time of Change" by Alexander Kravetsky.