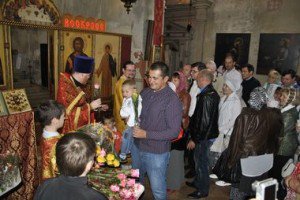 On 29 April 2012, the parish of the Myrrh-bearing Women in Venice celebrated its patronal feast. Rev. Alexey Yastrebov, rector of the parish, officiated at the Divine Liturgy. Concelebrating were Archpriest Nikolai Madaro of the Cathedral of St George in Venice (Patriarchate of Constantinople); Archpriest Dimitry Olovyannikov, Dean of churches of the Mytishchi district, the Moscow region; Rev. Igor Zavadsky, cleric of the Church of the Vladimir Icon of the Mother of God in Mytishchi; and Hieromonk Sergiy (Anuriev), cleric of the Radonezh metochion of the Lavra of the Holy Trinity and St Sergius.

Praying at the service were worshippers from Padova, Vicenza, Verona and Treviso, and pilgrims from Russia.

After the Liturgy, the priests led the procession with the cross around the old Church of the Beheading of St John the Baptist. The Orthodox community has been celebrating services in this Church since 2003, reports the web-site of the parish of the Myrrh-bearing Women in Venice.

The clergymen and the worshippers shared a festal repast after the service. They were joined by Fr. Paolo Ferrazzo, rector of the Catholic parish of St James. Addressing Fr. Paolo, Rev. Alexey Yastrebov expressed his hope that the transfer of  the Church of the Beheading of St John the Baptist to the Orthodox community will be completed by 2013, and the parish will celebrate its 10th anniversary in its own Church.