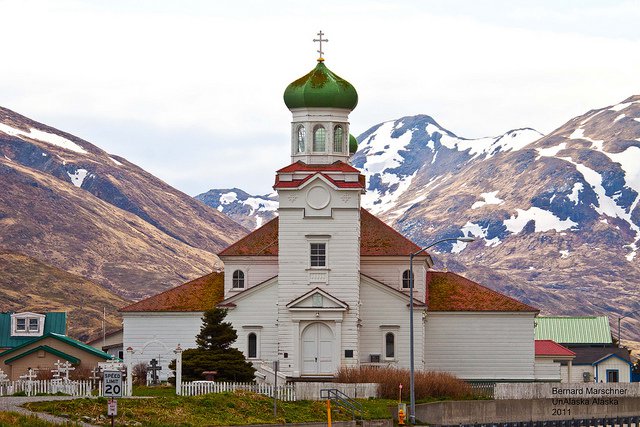 Graffiti sprayed on the historic Holy Ascension of Our Lord Cathedral here in late April 2012 has “sparked outrage,” reported the Alaska Dispatch.

While the words “Dutch” and “Duncha,” written in a childish scrawl in gray spray paint, were quickly removed, the painful emotions among parishioners and other local residents lingers.

“I was very upset and hurt,” Vince Tutiakoff, parish committee president, told Dispatch reporters.  “This is the first time in all my years that someone has ever desecrated the church.”  He and four other men removed the graffiti.

The stately Russian-Colonial style church was built in 1896, replacing a series of earlier structures dating back to 1806.  In the 1820s, Father John Veniaminov — Saint Innocent of Alaska — became the parish’s first resident priest.

“It personally bothers me,” said Jamie Sunderland, director of the Unalaska Department of Public Safety.  “We’re going to push really hard on this one.  I think there’s a good chance we can solve it….  Spray painting a church? Come on, that’s horrible.”

Priest Andrew Kashevarof told reporters that the incident could be viewed as a hate crime.  Since the church is considered a National Historic Landmark, it could also constitute a federal offense.

“It’s pretty serious,” Father Andrew told reporters.  “They may have not been thinking about it at the time.  I hope and pray they never do it again.”

History of Holy Ascension of Our Lord Cathedral, Unalaska, AK

Holy Ascension of Our Lord Cathedral, as it stands today, was built in 1896.  The structure was restored in 1996. The interior is from the original chapel with the exception of the lower level of the bell tower, which had to be replaced.  The current cathedral is the 4th church built for the Unalaska parish.

In 1824 Fr. John Veniaminov was the first priest assigned to Unalaska.  He stayed for 10 years, then was transferred to Sitka. While in Unalaska he replaced the chapel in 1825. In his journals he states that, although the church buildings were built with the help of the Russian American company, all articles needed for worship (icons & candelabras) were given by local residents by donating their furs to the company in the name of the church.

When Father John Veniaminov arrived he learned the Aleut Language and translated many prayers and instructions into Aleut.  The Aleuts did not have an alphabet, so he used the Russian Cyrillic alphabet.  He learned the language proficiently enough to translate the Gospel of Matthew into Aleut in 1828.  One of his greatest works for the Aleuts is believed to be the book called “The Pathway to the Kingdom of Heaven,” which had been translated into 13 or 14 languages and is still in use today.

After his wife died, Fr John went back to Russia, where he became a monk, taking the name Innocent.  He was consecrated a bishop in Russia and assigned to the Alaskan Diocese, becoming the first resident bishop of America.  He served in this position for several years before being reassigned, and was ultimately elevated to the rank of Metropolitan of Moscow.  He was canonized in 1971 by the Russian Orthodox Church in Russia as St. Innocent, Enlightener of the Aleuts and Apostle to America.

A third church was built on this site in 1858 by Fr. Innokenty Shaisnikov.  This church was similar to the central part of the current cathedral without the side chapels.

Finally, in the 1890s the Holy Ascension of Our Lord Cathedral as it stands today was built.  It was completed and dedicated in 1896.  The Priest assigned to Unalaska at the time of building of the cathedral was Fr. Alexander Kedrovsky, who served the parish from 1894 to 1908.  The cathedral had 7 bells in the bell tower.  Through the years of ringing the bells, one had cracked and had to be taken down awaiting repairs.  The remaining six bells are still rung during the divine services.

Located throughout the cathedral are several icons that date back to the 16th century from Russia.  In the central part of the cathedral, above the royal doors, is the long mural with different saints which goes all the way across the iconostas.  Although this icon was not in the 1910 park service photo, it is believed to have been a gift from the last Czar of Russia and is assumed to have been donated sometime between 1910 and 1917 before the fall of the Czar.

Holy Ascension Cathedral has two side chapels.  The one on the right is dedicated to St. Sergei of Radonezh.  It is believed to have the original iconostas from the 1808 chapel, with the exception of the royal doors which were from the church built by Fr. John Veniaminov in 1825.

The chapel on the left was originally dedicated to St. Innocent of Irkutsk. It has the iconostas from the 1825 chapel that Fr. John Veniaminov built, except for the royal doors, which were from the 1808 chapel.  Within this chapel we have a copy of the Aleut Gospel of Matthew translated by Fr. John in 1828 and a hand cross believed to be brought here by Fr. John dated 1800.  Also in this chapel are several icons that are believed to have been written by an Aleut iconographer, Ivan Krukov, who studied under Fr. John. One of these icons believed to be his work, an icon of St. Andrew, has mountains, volcanoes and terrain similar to the Aleutian Chain in the background.  When the Cathedral was rededicated in 1996, this chapel was dedicated to St. Innocent of Irkutsk and St. Innocent of Alaska (the former Fr. John Veniaminov, the first resident priest of the parish).

The services are still sung and chanted in the Aleut language, Slavonic, and in English.