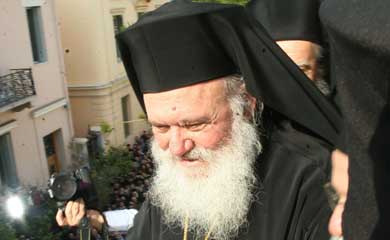 Archbishop Ieronymos, the head of the Church of Greece, has taken the rare step of writing to Prime Minister Lucas Papademos to express serious concerns about the effectiveness of the government’s fiscal policy and the effect it is having on Greek people.

In his letter, Ieronymos also raises doubts about the role of the European Commission, European Central Bank and International Monetary Fund – or troika – in the country and whether Greece should agree to further austerity measures to receive its next bailout, suggesting that they are “larger doses of a medicine that is proving deadly.”

Ieronymos expresses concern about the impact of the crisis, describing a rise in suicides, homelessness and unemployment and the desperate state that an increasing number of Greeks find themselves. He warned that this was creating a dangerous social situation.

“Greeks’ unprecedented patience is running out, fear is giving way to rage and the danger of a social explosion cannot be ignored any more, neither by those who give orders nor by those who execute their deadly recipes,” he wrote.

Ieronymos said he was encouraged by the way that people had pulled together and the extent of the help that Greeks are offering to those who are worse off but he expressed concern that the situation would worsen as a result of the economic policies being implemented.

In what seemed a response to suggestions that a European budget commissioner be appointed in Greece, the archbishop challenged the prospect of Greece giving up sovereignty over its decision-making process.

“It seems clear now that our homeland’s drama will not finish here but may take on new, uncontrollable, dimensions,” he wrote.

“There are, at the moment, demands for even tougher, more painful and even more unfair measures along the same ineffective and unsuccessful lines as in our recent past,

“There are demands for even bigger doses of a medicine which is proving deadly. There are demands for commitments that do not solve the problem but only put off temporarily the foretold death of our economy. Meanwhile, the put our national sovereignty up for collateral.

“They mortgage our wealth but also the wealth we could obtain from our land and seas. They mortgage freedom, democracy and national dignity.”

Commentators said it was almost unprecedented for an archbishop to intervene so forcefully in political and economic issues. Also, Ieronymos has a reputation for being reserved and having less of a tendency to comment on non-religious issues than his late predecessor, Christodoulos.