His books, as well as his lectures, refer to critical analysis of classical and modern philosophers and the reflection of their meaning on our current life.

Like a Pelican in the Wilderness (Holy Cross Orthodox Press 2000; trans. Norman Russell) 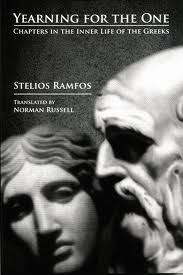 Книги
Yearning for the One: Chapters in the Inner Life of the Greeks, trans. Norman Russell
Ramfos, Stelios  —  14 мая 2012
How did the sense of the individual arise in European culture? And why did this sense develop more strongly in the Latin West than in the Greek East, in spite of the fact that some of the earliest reflections on the nature of the person belong to the Orthodox Christian world? In this searching investigation, Stelios Ramfos explores the roots of the modern debate on the person and concludes that the preoccupation of the Byzantine Greeks with eternity inhibited them from developing a fruitful sense of interiority. He argues that, nevertheless, a figure such as Leontius of Byzantium can suggest a way forward if Byzantine theological thinking is revisited in the light of insights derived from the Western philosophical tradition.