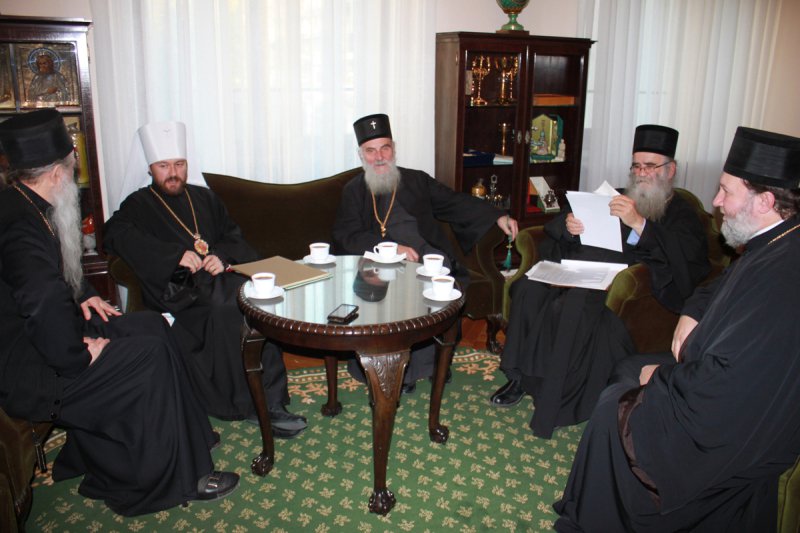 November 17, 2012 – the Holy Synod of the Serbian Orthodox Church gave a reception in honour of Metropolitan Hilarion of Volokolamsk, head of the Moscow Patriarchate’s Department for External Church Relations, who came to Serbia for a visit. Present at the reception were His Holiness Patriarch Irinej of Serbia, hierarchs and clergy of the Serbian Patriarchate, members of the delegation accompanying Metropolitan Hilarion during his visit to Serbia, the dean of the Belgrade Representation of the Moscow Patriarchate Archpriest Vitaly Tarasjev, A. Lisitsyn, member of Russia’s Council of the Federation, V. Ulasevich, minister-counsellor of the Russian Embassy in Serbia, as well as Russian and Serbian politicians, diplomats and businessmen.

After the reception, Patriarch Irinej and the DECR chairman had a talk. They discussed a wide range of issues concerning prospects for further development of fraternal relations between the Russian and Serbian Orthodox Churches in various areas as well as common Orthodox problems.

After the talk, Metropolitan Hilarion presented Patriarch Irinej and the Serbian hierarchs who participated in the talk with copies of the Serbian version of his book ‘Patriarch Kirill: His Life and World Outlook’, which has just come out.