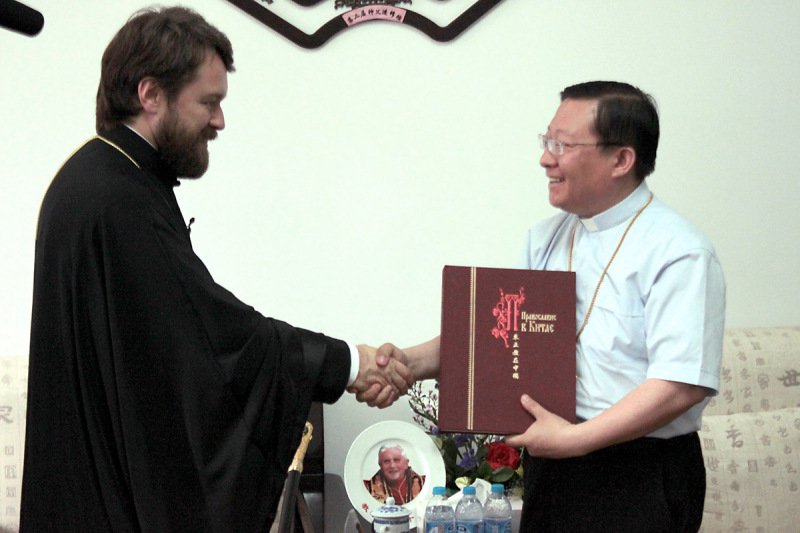 On 20 June 1012, Metropolitan Hilarion of Volokolamsk, chairman of the Moscow Patriarchate’s Department for External Church Relations, who is currently on a visit to the People’s Republic of China at the invitation of the State Administration for Religious Affairs, visited the National Catholic Seminary in Beijing.

After seeing the seminary’s church, which resembles the symbol of Beijing, Metropolitan Hilarion met with the faculty and students. Bishop Joseph greeted the guests and shared with them his warm recollection of his visit to Russian in 2006, during which he met with Patriarch Alexey II and Metropolitan Kirill of Smolensk and Kaliningrad, now Patriarch of Moscow and All Russia. He told the guests about the present situation of Catholicism in China and about the seminary and asked Metropolitan Hilarion to convey his gratitude and best wishes to Patriarch Kirill along with an invitation to visit the National Catholic Seminary and meet with Chinese Catholics.

Metropolitan Hilarion noted a possible cooperation between the National Catholic Seminary in Beijing and the theological schools of the Moscow Patriarchate, expressed his hope for the Chinese Autonomous Orthodox Church to occupy a proper place among religious confessions of China, and presented the seminary’s library with a book “Orthodoxy in China’ published in Russian and Chinese by the Moscow Patriarchate’s Department for External Church Relations and the Institute of Far Eastern Studies of the Russian Academy of Sciences.

Bishop Joseph gave a luncheon in honour of Metropolitan Hilarion and the Russian delegation.